Please consider ☆ing the hoani.github.io repository if you have found this website helpful.

The following are my notes are from Design Patterns.

Allows a client to produce objects with a common interface without knowing any details about the produced objects except for thier interface.

Allows a class to construct an object in steps using a common interface.

Use cases I’ve used builder for:

Specifies a factory method interface which concrete factories inherit from. Decouples the user of the factory from the specifics of what it produces.

Allows the production of objects through prototypes without knowing the exact concrete class.

Use static class tricks to ensure only one instance of a class exists. Can be useful for doing things like ensuring there is only one source of truth for time. Singletons often have the same disadvantages as global state - can be especially annoying in testing.

Also known as wrapper. A class which adapts the functionality of another class to a desired interface.

This is achieved in two ways:

Specifies a common interface for both primitive objects and compositions of objects so that the objects can be represented in part-whole tree structure heirachies.

Generally useful for grouping objects into a heirachical model.

A potential use case is running a multi-model simulation where the simulation state is propagated between compositions and primitive models.

Allows dynamic allocation of responsibility to objects (not classes) through decorator objects.

A decorator shares the interface of a target object, and then uses the target object as a delegate with the option of extending behaviour where necessary to acheive the decorator’s reponsibility. 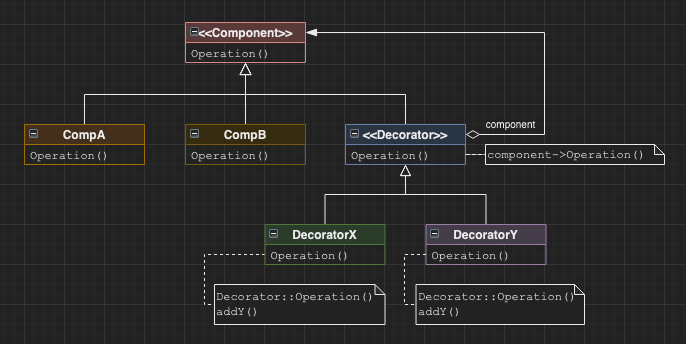 Provides a high-level interface to a subsystem.

An optimization used to reduce storage cost of potentially prolific but identical objects.

Use a pool of shared objects which are commonly used throughout an application.

The objects generally hold some intrinsic state that is useful across all clients and are handed temporary extrinsic state in which to operate on when used by a client.

A class which takes requests on behalf of a subject to control access to that subject. Applications are:

The chain of responsibility allows an event to be handled across a context-sensitive chain of instances. The request is terminated at the first handling of that event. The sender is decoupled from the implicit receiver of the event.

Commonly used with composite where unhandled requests propagate towards the root of the tree.

For example, the action key in a video game may trigger a selection in a menu, open a chest, or cause a player to attack - all of which may be valid actions in a given context; however with a menu open, we probably don’t want to open the chest or initiate an attack.

Decouples the invoker of a request from the request itself and the receiver of the request. Allows arbitrary numbers of requests to be added to an invoker and dynamic adding/removing of requests.

Uses an abstract syntax tree to traverse and interpret a language (usually a dsl).

Separate the traversal of an aggregate (list, map, set, etc) from the storage of the aggregate. Allows some abstraction so that iterators of different aggregates may share an interface. Also allows various iteratation algorithms.

Decouples a group of objects from thier interactions with eachother. Allows complex interactions to be handled as the responsibility of the mediator, rather than distributed thoughout many colleague objects.

Opaquely capture the relevant state of an object so that object can be restored to that state if necessary.

Involves a single subject and one or more observers which are notified when the state of the subject changes. Allows an arbitrary and dynmaic number of observers. Very similar to publish-subscribe.

Have an object delegate some of its behaviour to state objects. When state changes, the state delegate is changed accordingly. Allows an object to have arbitrarily extendable state.

Provide a common algorithm interface so that the underlying algorithm used can be exchanged depending on the context of what needs to be achieved. This might be useful for example when computing mortgage rates depending on various vendors.

Implements the invariant parts of an algorithm in an abstract parent class, and lets subclasses fill in the variant functionality. 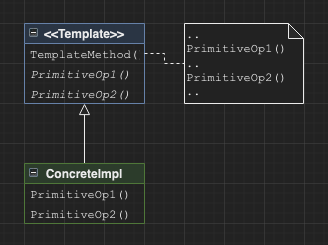 Allows us to perform operations on objects in an object structure. Visitor supports objects of multiple classes, but will need to know about each class.